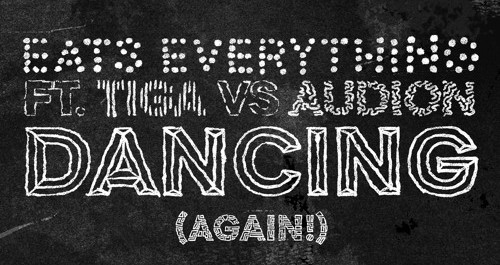 Absolutely mental track that people just can’t get enough of. Dance floors around the globe have been getting down to this for a minute now and we are happy share it with you.

Here is the story behind the track straight from the man himself, Eats Everything: “Dancing was born from playing at Bugged Out Weekender a few year back. I was playing my version of Ron Costa – Gez Uri & Breach had given me a copy of his track, Jack. I think I was one of the first to have it & I just stuck the Jack vocal over the Ron Costa thing on the fly & when it dropped the place went mental. From that shit loads of people kept sending me videos asking what this track was etc so I thought fuck it, went into the studio & fucked about more with the Ron Costa record & put the Jack vocal on top & made into an edit which became the highlight of mine & a lot of my DJ friends sets. Forward on a year & Tiga & Audion – Lets Go Dancing had just surfaced & it was massive. Jack was obviously a chart song by then so I had stopped playing it. I heard Lets Go Dancing & thought aha, this could replace the Jack vocal!! So I messaged the lovely Tiga, asked for the acapella & he obliged. I went back in the studio, edited the Jack track with the Tiga vocal & the behemoth was born. That was way over a year ago & it’s been going mad in my sets & lots of other people’s. So many people have been asking for this record so Disclosure & The Method boys came up with a plan to release it. All parties involved, Ron Costa, Tiga & Audion have all made the process of getting this record out to the people & now it’s here & I hope people like it!“

There you have it folks, enjoy this song and check out the pre-order here!